We got a bit of a rain here down on the French Riviera. A real test was revealing some holes in my armour unfortunately. I have used these pants in multiple occasions, but still, they are only one year old. This was the harshest rain I have ever been out for that long. I mean of course some times I survived extreme one or two hour long showers, but today I was out for 8 hours, no breaks, just riding and doing my messenger work. As general goes, it was between 5 and 20mm of rainfall an hour. Time to time the water level on the roads increased, depending where, around 15 to 30cm. Yeah, it was raining. I mean, have you seen a bike messenger running wellington boots ? My colleague did and yes, he stayed warm, dry and you cannot even see them under the waterproof trousers !

Here are two website’s forecast. One was saying 23.5mm an hour while the other was going with 12 to 13mm. You can see that the pressure is like 30hpa lower than sea level pressure.
So the pants let some water in as the rain was really hitting me hard because of the wind gasps, but also the water from my gore-tex coat was flowing down on my trouser. We talk about cycling. It is moving, but on a quiet special way. I had some “angels” showing up on the front of my leggings underneath the over-trouser on the front-hip section and my on the inner thighs.
No don’t get me wrong here. I was not wet, like water got in and could squeeze it out. I got damp, humid. If I wore like a really breathable high quality under wear, I would probably did not even realised it.
That is one thing. The second is windproof-ness. We had some serious gusts going on. Probably it is not only the fault of the external trouser, but the under wear too. I felt the cold creeping up on my legs. I felt the same feeling when stopped riding for a second on my upper body too, but it was because of the lack of movement, not due to the wind. However, it really was obvious in turns. I was cold at my thighs and knees, then a right turn and I had the chills on my side. When coming backwards, my hams, gluts and calves were on the cold side.

The advantages of having this trouser

Light for its waterproofness and very compact, made of a thin, pliable and resistant fabric. If used with a quality synthetic base layer, it doesn’t disturb you at all. I am putting a big emphasis on this as if you used it with 100% merinos or cotton, the inner gore-tex might grab on it and the cycling experience would be suffering. Don’t try using it long term with a short under neath ! Your leg movements will be blocked.
There are two snap-buttons made of plastic on the bottom, so you can really lock the leg-sleeves down on your ankles. They won’t be caught in the chain or on your bottle-cage ! Athletic cut, not too baggy ! I am 6’5″ / 195cm / 83kg ! I chose sizeXL and they are just  fine. The legs are long enough ! This design makes the pants multi-purpose ! I had them with me during trail running ultra marathons and big mountain traverses. Pica Pica challenge, Tor des Geants, Climbing the Cime de Gelas and Cima de l’Argentera. Also when doing the Mont Blanc tour or hiking around la Jonction and the glaciers around Chamonix.
I clearly can say that it is a fantastic trouser !

Made of Gore-Tex Active Shell, so it has its limitations in case of rain and abrasion resistance. You can move more freely and it is super-light for sure, but in certain cases I am ready to compromise on this for more water resistance and more heat retention, where 3 layer GoreTex or E-vent layer would be more appropriate.

Situations where you want more:

If any of you found a 3 layer GoreTex Pro or 3 layer EVENT shell, what is kind of lite and kind of compact and suitable for cycling, I would appreciate your comments !
The Montane Alpine Pro has a fantastic cut with a three layer GoreTex Pro, but with all it’s features it becomes a little bit too much. Also 501g !
There is also the Klim Overshell Pant , but it is marked GoreTex 3 Stretch Performance.
What I am looking for is probably gonna be the ShowerPass Refuge , what is a 3 layer 15000mm resistant cycling dedicated pant. There are reflective layers, waterproof zips for breathability and ride ready cut.
https://showerspass.co.uk/collections/mens-pants/products/refuge-pant 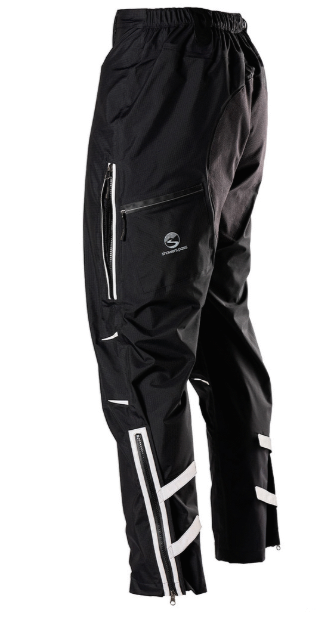